How time flies! How can it be the end of another year already?! We’ve only just realised how long it’s been since we wrote a short blog post, however it’s been a busy year all told and so we wanted to share a little flavour of what we’ve been up to since the summer. 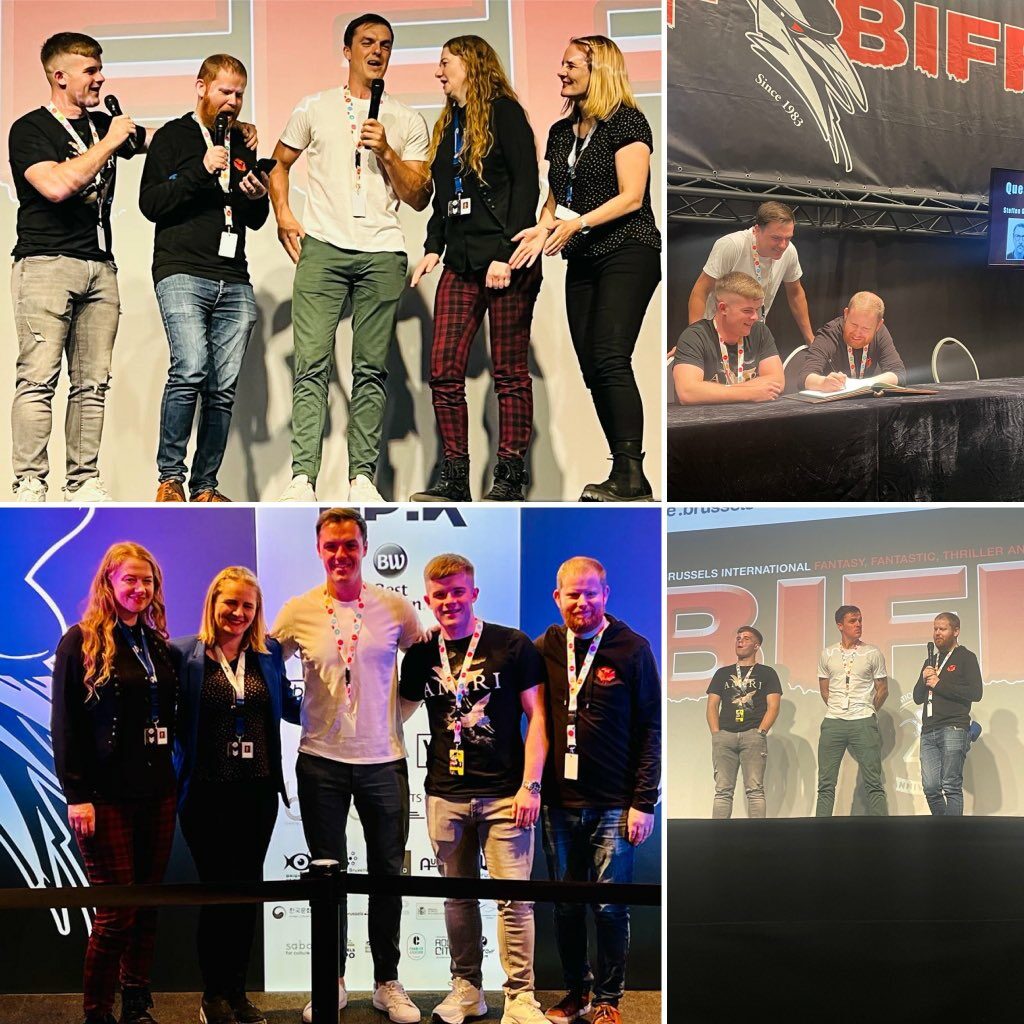 In August, our team travelled to Brussels International Fantastic Film Festival to pitch ‘The Scarlet Chamber’ fka ‘Night Town’, our historical gothic thriller written by longtime creative partner David Turpin and to be directed by IFTA-nominated director Imogen Murphy (‘Dead Still’). Fresh off the success of pitching the project at Cannes, the trip to Brussels solidified our interested partners and opened us up to some new leads and sales partners. We are currently in the middle of intensive work on the script in the hopes that we can commence financing in early 2023. Our upcoming vampire horror-comedy feature film ‘Let the Wrong One In’ also screened to an amazing audience reaction at BIFFF!

At the end of September, our live-action children’s drama series for 9-13 year olds ‘Louise Lives Large’ showcased at Kids Kino in Warsaw, Poland. The international co-production forum allowed us to network with some major players in the children’s entertainment industry and partner with some incredible new leaders in the field. The series is created by BBC Writersroom alum (and recent Zebbie winner!) Carol Walsh, co-written by Sian Ni Mhuiri (‘Aunty Ben’) and Richie Conroy (‘Drop Dead Weird’, ‘Mallory Towers’), and set to be directed by Tailored’s resident director Ruth Treacy and Laura Van Haecke.

In late November, some of our team attended the prestigious TV development marketplace Content London for an exclusive look at what the global content industry is after. The conference gave us the chance to attend panels with some of the world’s leading industry members, re-connect/meet with creative collaborators old and new, meet several of our connections and literary agents in person, pitch our TV projects in development and hear pitches from emerging and established talent. We also managed to (unknowingly at the time) descend the same fabulous stairs from the Spice Girls’ ‘Wannabe’ video. That explains the distinct urge to slam your body down and wind it all around!

Another series of ‘Der Irland Krimi’ officially wraps! After a successful production in 2021, we were delighted to be asked to return as co-producers for series 4 of German crime series ‘Der Irland Krimi’. The 9-week shoot wrapped earlier this month, and just in time for a well-deserved Christmas break! The solid commitment and hard work from all cast and crew took series 4 through a very smooth production process from start to finish, and we look forward to seeing the finished episodes next year. Series 3 held over 20% of the audience share on ARD when it premiered, attracting over 6 million viewers! Such astounding figures prove there is huge appetite for the show and we look forward to viewers seeing the next chapter. Watch the trailer for series 3 here.

As 2022 draws to a close, so does financing on our exciting rural revenge thriller ‘Bring Them Down’. The project is helmed by writer/director and Screen Star of Tomorrow 2019 winner Chris Andrews, and will also be his debut feature film. It is a co-production between Tailored, Wild Swim (UK) and Frakas (Belgium), and is funded by Screen Ireland, BAI, Mubi, and BFI Global Screen Fund. We’re gearing up to begin principal photography in early 2023 and have secured a star-studded cast to bring this dark and powerful story to the screen. Although we are not relishing the thoughts of filming at night at the top of icy cold mountains, it is a special project and we are looking forward to sharing updates on it with you in due course. 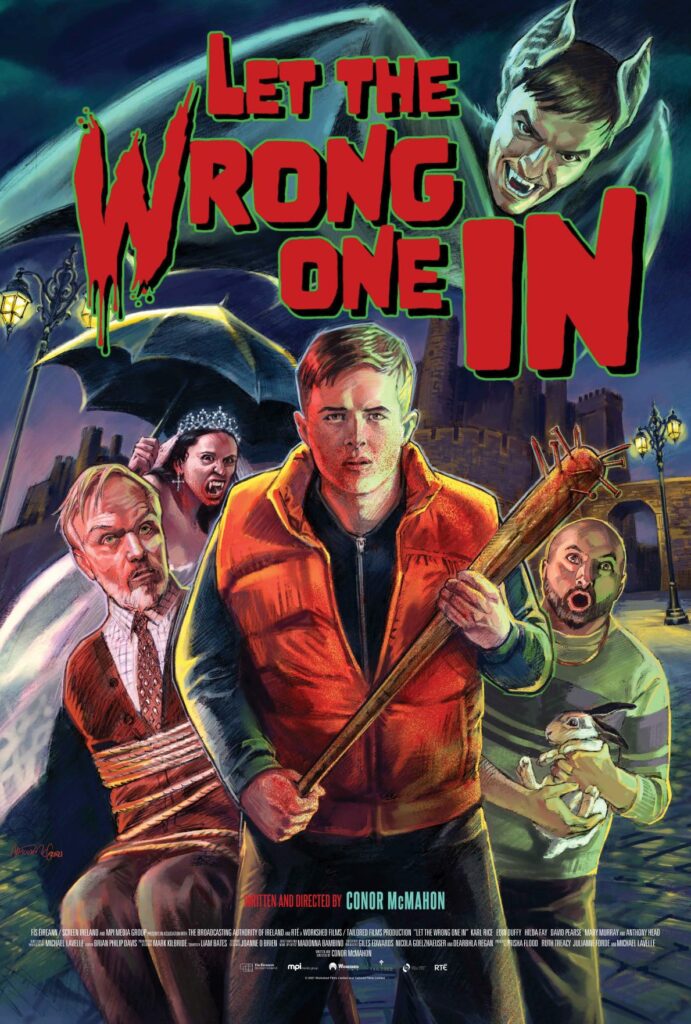 It’s been a long wait, but ‘Let the Wrong One In’ will finally hit theatres early next year after finding great success in the festival circuit. The film garnered fantastic crowd responses from its showings at Sitges, DIFF, Fantastic Fest, Fantasy Filmfest, Screamfest (for which it won Best VFX), Trieste, Glasgow FF, BIFFF and elsewhere, so come see the hilarity for yourself when ‘Let the Wrong One In’ lands on the big screen on January 20th 2023. We had an absolute ball making this film, so we can’t wait to share it with local audiences. Check out the trailer below!

This year we’ve worked on a few large scale projects with many focusing specifically around mental health and social issues. Our work with pan-European online platform ENTR / France 24 wrapped up earlier this year, with a total of 12 short documentaries produced as part of the ‘Generation Lockdown’ and ‘Changemakers’ series. Check out some of our work on ENTR below.

We were also very honoured to be closely involved with an organisation we greatly admire the work of the last number of months – St Patrick’s Mental Health Services. As part of St Patrick’s ‘Walk In My Shoes’ campaign and new efforts to provide information to current and future services users, we wrote, directed, produced and edited over 30 short videos for the organisation. The videos offer concise introductions to the services offered at St Patrick’s, how to avail of their services, and explain the differences between certain mental health conditions, all the while contributing to St. Patrick’s tireless efforts to promote mental health awareness in Ireland. Though work is still ongoing as part of this project, we still feel privileged to be part of something so important and continue to give our full dedication to ensuring the best possible quality for this vital initiative. You can find some of our completed work for St Patrick’s Mental Health Services on the Walk In My Shoes YouTube page here.

We worked on a new project with the National Museum of Ireland creating a documentary about the Our Irish Chair: Tradition revisited exhibition. The full documentary is available to view here.

We have also continued our long collaboration with Children’s Health Ireland, producing a number of animations for them throughout the year.

As we look towards the new year, we look forward to working with clients old and new as we progress with more exciting digital projects.

This year also saw some long standing team members sadly depart for new challenges in their career paths – namely our in-house editor Oisin O’Neill and producer Eithne Fitzsimons. As both were with the company for six and five years respectively, they are very much missed and left us with big shoes to fill. Thankfully, we managed to find three fantastic new team member additions during the course of the year. As we secured Creative Futures Funding from Screen Ireland earlier this year, we were in a fortunate position to be able to recruit a much needed Business Affairs Executive, and we were delighted to welcome Gary Ryan to the fold in September. Earlier in the year, accomplished comedy writer and editor Diarmuid O’Brien came on board, and most recently, in the last couple of weeks, the vastly experienced Producer / Director Mairtin de Barra joined the team and will lead a number of our TV projects in the coming year.

In addition to ‘Bring Them Down’, our children’s drama series ‘Louise Lives Large’ is also edging closer to production, with a shooting date scheduled for Q2 2023. Auditions are just starting and we have already seen some astounding young talent over the last number of weeks, so watch this space for casting announcements coming early next year!

We are immensely grateful to have had such a productive 2022. This year marked our first time receiving the prestigious Creative Europe slate funding grant (after numerous attempts!) and opened huge avenues for us to explore fresh new territory, placing us in an advantageous position to shine that little bit brighter on the international stage. We will carry this gratitude into 2023 with heaps of optimism and a bright outlook on the fresh new projects we can bring to market as a result.

There are lots of exciting challenges to look forward to in the new year, but for now, we wish you and yours a very merry Christmas, and a safe and prosperous new year from all at Team Tailored!

P.S. Anticipating you’ll be in need of a laugh after the festivities? ‘Let the Wrong One In’ is in Irish cinemas January 20th 2023. Save the date (in case you forgot already!!)