PITCHING AT THE FRONTIÈRES PROOF OF CONCEPT EVENT AT CANNES

This month, we were selected to pitch at the prestigious Frontières Proof of Concept presentation at Cannes, where we presented our gothic thriller ‘Night Town’.

‘Night Town’ is set In Dublin’s late 19th century red light district and sees a teenage girl on the run drawn into a sinister vortex of love, revenge – and murder. ‘Night Town’ exposes a hidden history specific to Ireland, posing questions about bodily autonomy, women’s quest for independence, and the elusive moral and psychological quandaries of sex work in a historical context for modern audiences.

‘Night Town’ is supported in development by Screen Ireland and Creative Europe, and marks our third collaboration with writer David Turpin, who also penned ‘The Lodgers’ and ‘The Winter Lake’. IFTA-nominated director Imogen Murphy (‘Dead Still’) is also set to direct. Both joined us in Cannes for the pitch, and enjoyed some well deserved Rosé on the Croisette afterwards. 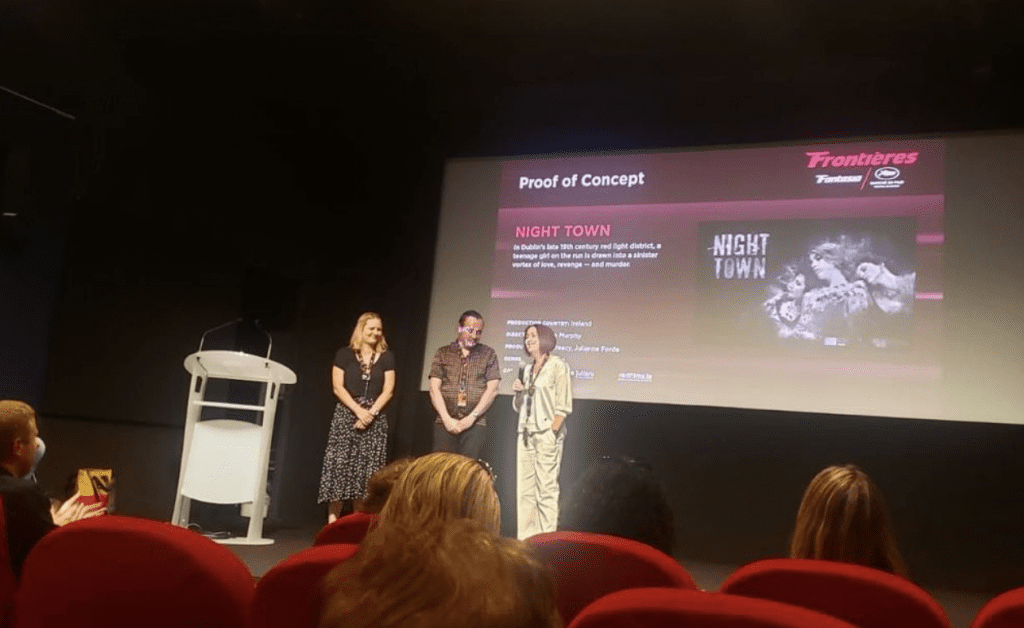 While in Cannes, we seized the opportunity to meet with old friends and creative partners from all around the globe, including some of the Producers on the Move colleagues that participated in the EFP event with Ruth last year, and our co-production partners from the UK, Belgium and Finland. We were delighted to finally meet some of our new partners in person, including the team at Frakas, who picked up the Palme d’Or at Cannes last year for ‘Titane’. Together we will be working on a rural revenge thriller, ‘Bring Them Down’, later this year.

We also had the opportunity to check out ‘Let the Wrong One In’ on sale at the market. 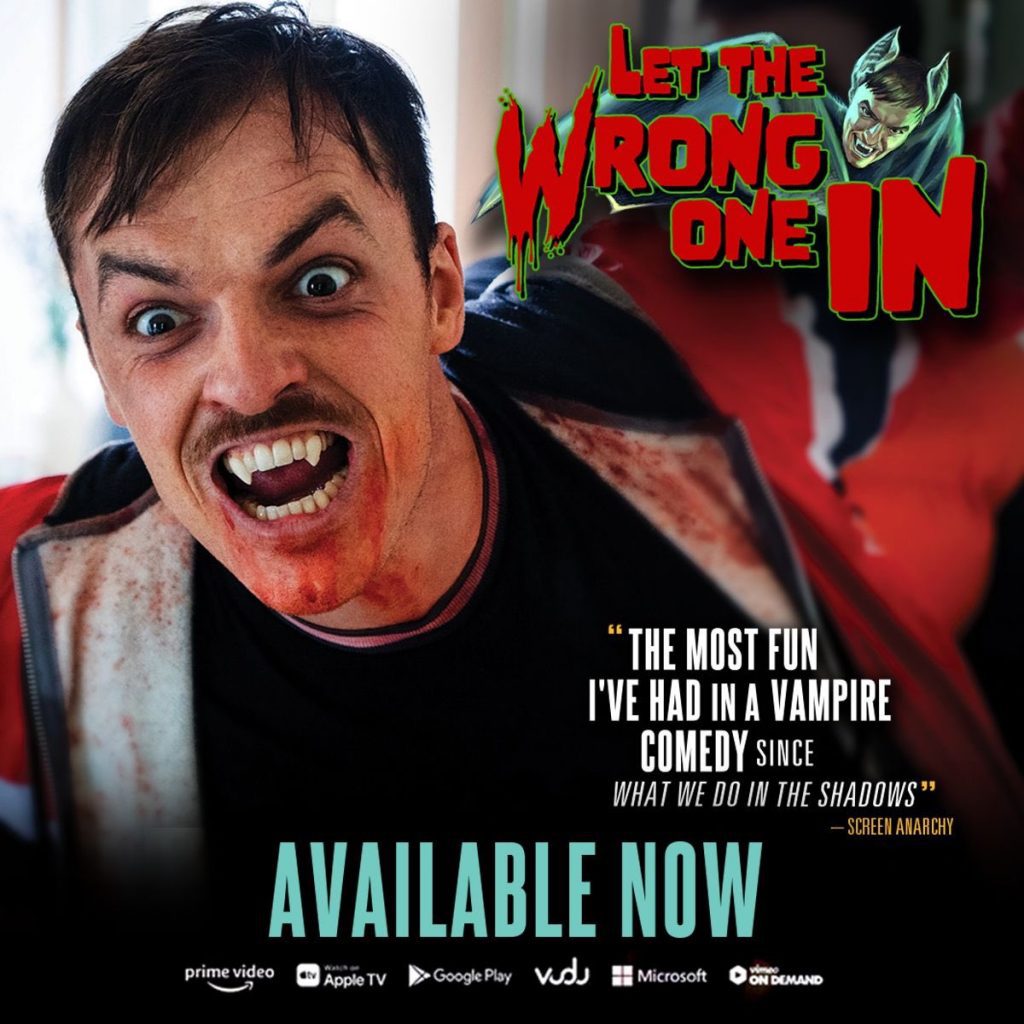 It was a pleasure to be able to attend Cannes in person this year, made all the more sweeter after two years of virtual participation. We’re excited to follow up with some of the new connections we made and to move ‘Night Town’ forward into financing stages. Watch this space!

We were overjoyed to learn our application for Creative Europe slate funding was successful this year. After securing single project development funding on two previous occasions, not to mention many years of previous slate applications being only slightly under the threshold with the points we received, we are thrilled to accept this much-coveted award for the very first time.

The immense augmentation this will provide to our slate over the next three years presents huge avenues for our company, and places us in an advantageous position to shine that bit brighter on the international stage. Having participated in Screen Leaders and the EFP Producer on the Move scheme to position ourselves as individual screen leaders in terms of our company reputation, securing slate funding has allowed us to build on this reputation and demonstrate our new profile with exciting new projects that we can bring to market in the future.

Company directors Ruth Treacy and Julianne Forde said of the great news: ‘Tailored are absolutely delighted and truly honoured to have been selected for this year’s Creative Europe Slate Funding Award. This long-standing initiative is one of the most highly respected across the film industry and will provide invaluable augmentation to our slate of projects, so we are immensely thankful and excited to see where this incredible opportunity will take us.’

You can read more about our experience with Creative Europe slate funding HERE here.

INTERNATIONAL TV AND FILM MARKET ATTENDANCE IN EUROPE AND THE USA

While Ruth and Eoin attended Cannes, Julianne was welcomed to Los Angeles as part of the Irish consortium via Screen Ireland. As well as availing of the opportunity to progress our projects through one-on-one in person meetings, Julianne was also invited to attend multiple events, including being the sole representative of producers in the film and TV sector at a roundtable discussion with Minister Catherine Martin.

The Ireland Connects VFX spotlight organised as part of Ireland week was a particularly timely, as just a few months ago, in the city of Los Angeles, Tailored Films were awarded with the prize for Best VFX at Screamfest LA for our feature film ‘Let the Wrong One In’. The Ireland Connects VFX spotlight event featured truly inspirational guests like Ireland’s Oscar winning Richie Baneham (‘Avatar’), Kevin Baillie (‘Flight’) and Kelly Port (‘Spiderman: No Way Home’). 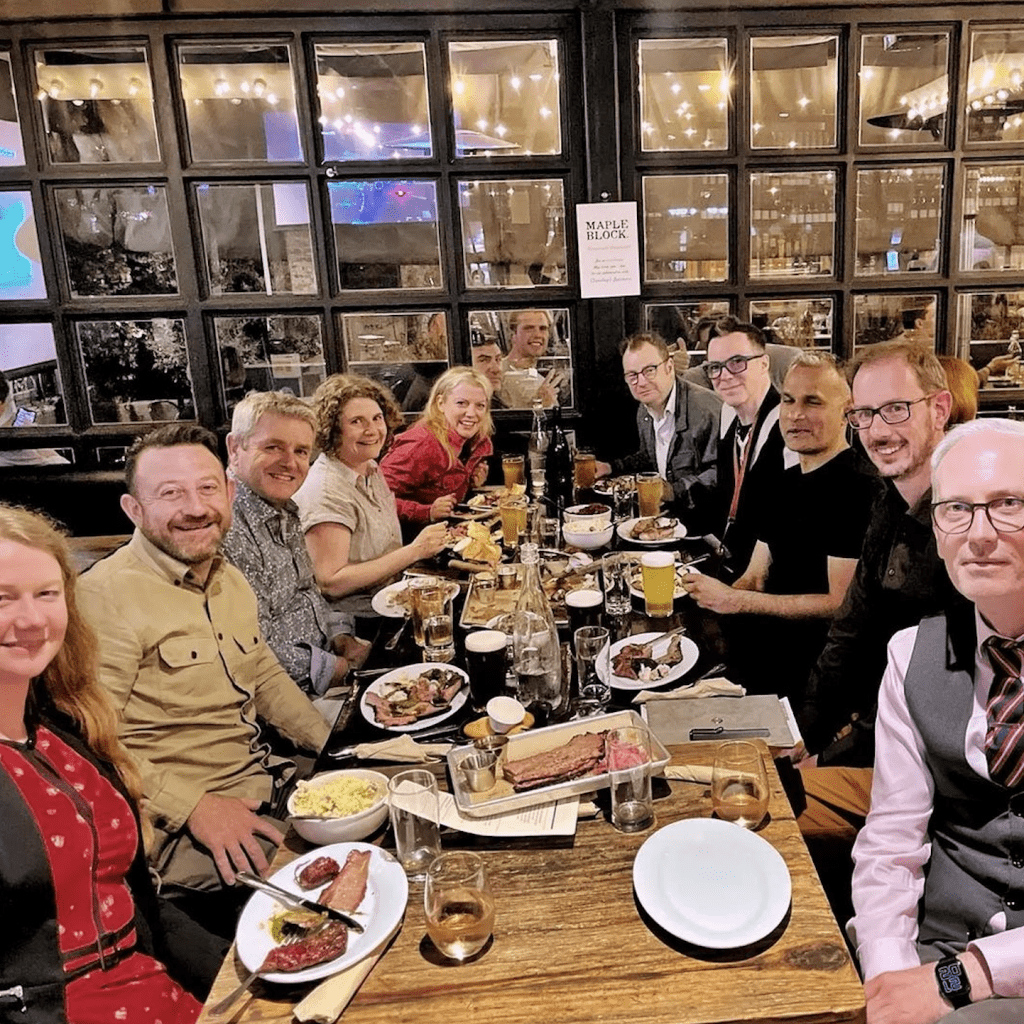 Julianne also attended the prestigious launch of Irish website https://www.wheretowatchireland.com/ which allows users to search where Irish film can be viewed in any country in the world. The launch was a success, with Irish actor Colin Farrell amongst the notable guests in attendance.

The highlight of the week was attending the television conference Content LA. Content LA is an invaluable opportunity to forge fresh partnerships with both US and international partners. Held at The Ebell of Los Angeles and organised by C21Media, this 1 day event brought together 750 leading players from the domestic and international content business, providing unique insight into the future of film and television. With insightful keynote speeches from Netflix, HBO, AMC, Universal and Paramount amongst others, the conference really offered an insight into current trends and future demands of the market. 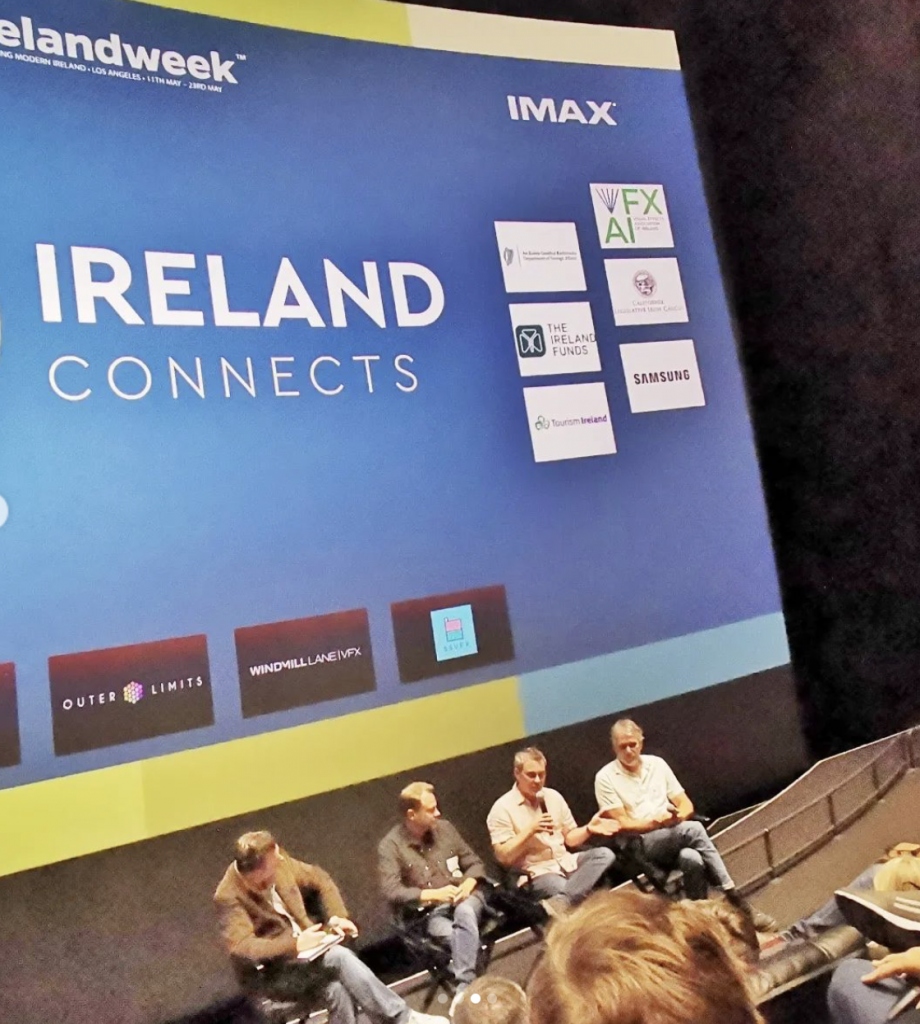 The combination of our attendance at Cannes and Content LA only further ensures our slate projects inch closer towards production-readiness, while offering new and exciting projects to add to our catalogue.

ADVANCED DEVELOPMENT FOR OUR SCRIPTED COMEDY PROJECT WITH RTÉ

‘Otherhood’ serves hilarity and heart in equal measure as three 30-something women grapple with their own individual challenges in relation to motherhood and child-free life, while also struggling to maintain their lifelong friendship with each other. The series exists in the hinterland between the responsibility-free, drunken abandon of ‘Can’t Cope, Won’t Cope’ and the world-weary routine of parenting school-aged children in ‘Motherland’. For these three women, dilemmas relating to motherhood in all its iterations – pregnancy, motherhood and otherhood – loom large, where every choice feels like a potentially life changing one.

The series is written by Máire T. Robinson, author of ‘Skin Paper Stone’ and ‘Your Mixtape Unravels My Heart’, who also was selected for the Screen Ireland New Writing Scheme in 2019.

A NEW MEMBER OF TEAM TAILORED

After 7 long years as a treasured member of the Tailored Films team, our editor Oisin O’Neill has moved onto pastures new. We wish him the absolute best in his career and value all the amazing work he has done for us over the years. We will miss seeing his face in the edit suite!

Oisin was part of the team who won an IFTA for his work as a VFX artist on Tailored’s cinema-released feature film ‘The Lodgers’ in 2017. He was integral to the offline edits for several of our TV series produced for RTÉ, as well as hundreds of digital projects on the Tailored slate, most recently a suite of videos for ENTR, a bold new digital space for young Europeans.

Taking on the role of editor for Tailored is Diarmuid O’Brien, known for his direction and editing of video sketches for the popular Waterford Whispers News website. Diarmuid is an accomplished animator and also the head writer of RTÉ’s new flagship comedy panel show ‘Clear History’, now currently airing series 2.

We are delighted to have Diarmuid onboard with us and can’t wait to welcome him to the company.

A busy production period lies ahead in the coming months, including our children’s comedy drama series ‘Louise Lives Large’, created by Carol Walsh, which recently successfully secured production funding from Screen Ireland and is slated for production in early 2023.

‘Louise Lives Large’ follows the misadventures of newly cancer-free 13-year-old Louise Edgar, who is on a mission to make up for lost time with the help of her ‘live large’ list; an ‘anti-bucket list’ filled with the normal rites of passage for teens, from her first kiss to ditching school. But she needs a partner in crime. Enter Jess. Jess is a rebellious outsider who is secretly struggling with her sexuality and she needs a friend now more than ever. Louise and Jess’ friendship sparks seismic changes for both girls as they learn invaluable life lessons, but the ghosts of their pasts are never far behind…

In the lead up to pre-production for ‘Louise Lives Large’, we will be embarking on a new digital project that we are very proud to be involved with. As part of the new ‘Walk in My Shows’ initiative to promote the services of St. Patrick’s Mental Health Services and raise awareness of mental health issues, we will be producing a suite of informational videos that will provide the public with all the supports and advocacy afforded to new and existing service users.

St Patrick’s Mental Health Services is Ireland’s largest, independent, not-for-profit mental health service. Mental health is a topic that is very close to us here at Tailored Films. Not only do we strive to increase awareness through the themes that arise on our feature film and television slate, but we also endeavour to broadcast this awareness through our digital projects and corporate videography. This has been a core component to our work since the beginning, so we are honoured to be working with St Patrick’s for this brand new initiative.